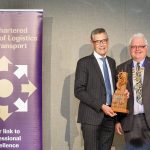 Resolve Group is immensely proud to acknowledge our own Rick van Barneveld as the 2019 winner of this award, given for an outstanding contribution to the logistics, transport or supply chain sectors. At the ceremony, Rick was celebrated as someone who has promoted professionalism and excellence through leadership and example, encouraged young people to enter the sector and assisted them in their development and provided mentoring and leadership in the wider community on a voluntary basis.