Auckland Transport has been aware for many years that the rate of increase in car use in Auckland is unsustainable. Congestion is spreading further across the city for longer periods of the day, driving road productivity down. There are also concrete data to suggest road improvements for one mode may have reduced the ability of the road to support other modes (e.g. creating cycle lanes may have made it difficult to accommodate bus lanes and vice versa). Connected Communities takes a different approach by considering all modes and safety at a network level simultaneously and, by doing so, makes a transformational response to the issues generated by congestion, whilst also improving the urban design of towns along each corridor.

The proposal is to reallocate road space in an integrated manner, which considers the needs of public transport, cycling, pedestrians, and general traffic whilst making Auckland’s arterial roads safer. The solution will generate a network of bus and cycle lanes on the main arterial roads on the isthmus, reaching out towards Henderson in the east and Papakura in the south. The network of bus lanes and cycle lanes will allow public transport and cyclists to move more quickly and more safely than at present, which in turn will encourage more people to cycle or catch the bus.

The transport planning phase has taken place over the last year and included most transport consultancies in Auckland banding together to form three large consortia. Resolve Group was part of Consortium 3 which was led by WSP and T&T. Resolve Group’s Stuart McDougall has managed Consortia 3’s five business cases, whilst also being part of the small team which designed the overall transport philosophy. The entire project is expected to take over a decade to complete but will have a transformational effect on how Aucklanders travel. 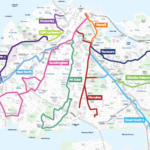 The map on the left shows the proposed Connected Communities corridors. It is interesting how closely these routes follow the historic Auckland tram routes  (apart from Dominion Road which is being consider for a light rail project) as shown on the right hand map.